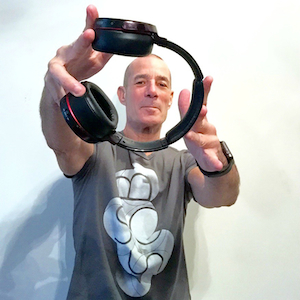 Canada has long been a hot bed of Electronic Dance Music, showcasing producers in all their glory from every corner of the land. Jeff Bone is one of those DJ/Producers that continues to addto the rich vibrancy of Canadian dance floor culture. He is celebrated as an artistthat understands the foundation blocks required to take people on a musical journey. He crafts delicious soundscapesof extraordinary music designed to enticeand inspire listeners to get down and dance in the moment.Jeff Bone’s music has been heard by millions across the airwaves as his tracks have been featured on high rotation around the globe, and his DJ skills have been witnessed as far afield as Mexico and the USA.Hailing from Toronto and overseeing the outstanding recording facility, JL Recording Studios, Jeff understands the sonic nuances required to take music to the next level. Like many that really start to make a mark as a producer, he has plied his trade for over three decades, and since 2017 has really hit a purple patch with his production releases.DJing from the age of 16 at Toronto’s fabled Nuts and Bolts venue and musically trained as a guitarist, Jeff is able to bring that learned legacy to his releases with an outstanding array of musical engineering skills.Multi-dimensional and befitting a producer of his experience, he is able to navigate the waters of melodic, infectious House grooves,tinged with his eclectic influences gained over a lifetime of dedication to the art. Away from the House Music arena, he started his journey by listening to artists such as Queen,David Bowie, George Clinton, Morris Day, Kraftwerk, Tangerine Dream, Depeche Modeand Gary Numan.As the pop sensibilities gave way to a love ofpure dance music and House; Frankie Knuckles, Jellybean Benitez, Giorgio Moroder, David Morales, and Bob Sinclar came to the fore. Those integral building blocks of the masters are clearly evident as he enters the most prolific period of his career to date.Remixes are the cornerstone of how a producer becomes a fully-rounded artist and Jeff Bone’s catalogue of work shows a complete understanding of how to update and recast classic tracks for a new generation of listeners. His emergence on to the big stage started in 2017 with his versionof ‘Digital Kitty’ out on Slammin Media. Sincethen, he has been releasing remixes underpinned by meticulous class which havereached audiences far and wide.He has produced reimaginings of classic tracks such as Janet Jackson’s ‘Control’, Halsey’s ‘I’m Not Mad’, Aerosmith’s ‘Sweet Emotion’ and Jennifer Holliday’s ‘No Frills Love’.To date these tracks have featured in heavy rotation on 34 radio stations across the planet, reaching over a million listeners.This is the springboard that will see him delivering more remixes in 2021 but more specifically, a rolling wave of original work which is bound to send his audiences to the far reaches of dance floor heaven. Imbued with extraordinary synth work, textured backdrops, moving baselines, and expressive vocals, Jeff Bone is set toadd to his enormous pedigree that has seen him work alongside artists such as Nico Sykes and the legendary ManchesterDJ, Paul Walker.“For me, it’s all about mood and an uplifting, infectious groove… playing thosetracks to get you tapping your feet and nodding your head without you realizing it,regardless of style, genre, tempo, or release date.”As the world emerges from the dawn of a new age of dance floor experiences, Jeff Bone’s star is set to shine, making music that will reach an ever-expanding legion ofHouse Music fans.